By using our website, you consent to the use of cookies in accordance with the Cookie Policy.
Modify settings I accept
These cookies help make the webshop usable and workable.
These cookies help us to display advertisements and products that match your interests in the webshop.
Your are here: Home > Webshop > Products > Collagens > 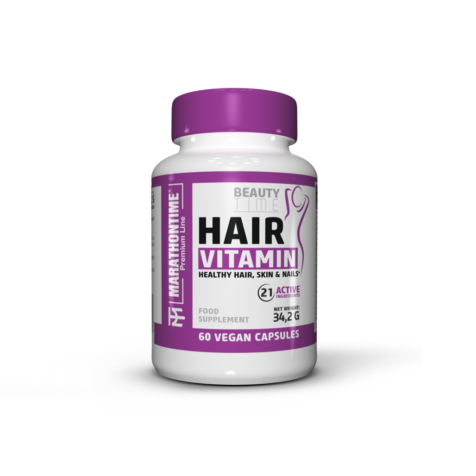 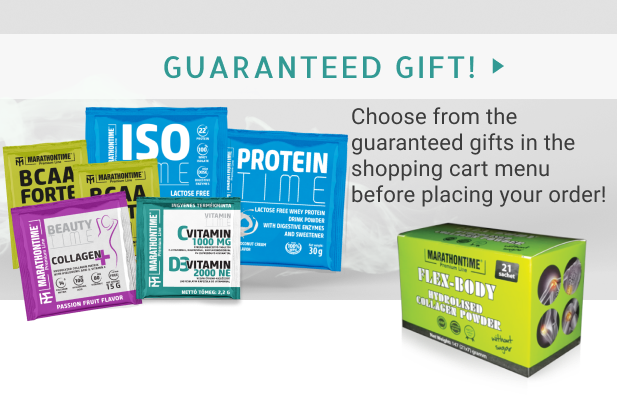 Why do we recommend taking Marathontime Hair Vitamins?

Golden millet is a cereal with a high mineral content and an important source of trace elements, vitamins and amino acids.

It is involved in the structure of the skin, hair, cornea and nails due to its sulfur content, but it is also found in creatine, tendon proteins. It helps to clear toxins from the body.

In addition, it can have a protective effect in diseases affecting the brain and nerve cells. It helps break down body fat and increase muscle mass.

Reduces joint pain and inflammation. It helps maintain the structure of the body's proteins.

They are also called compounds of healthy, radiant skin. It is no coincidence that both have been used with preference in the beauty industry for a very long time. The human body itself produces these substances, which play an equally important physiological role in the bodies of men and women. But their production slows down with age, so their replacement may be needed.

Vitamin A - commonly known as retinol - belongs to the family of fat-soluble vitamins and one of its most important functions is to provide vision at dusk. It is needed in the retina of the eye to produce rhodopsin or purple, which is responsible for sensing light.

Vitamin D is produced in the skin when exposed to sunlight, so it is especially important to make up for it during the winter gray months, when it is often deficient in the body.

Vitamin E is a fat-soluble antioxidant vitamin that protects against the damaging effects of free radicals.

During intense sports, when the metabolic processes are accelerated and the number of free radicals released from the cells increases.

These released free radicals can damage muscle tissue and cause fatigue.

Vitamin E plays a key role in protecting the cell membranes of individual cells and contributing to antioxidant processes. It is a long-known and popular ingredient in the cosmetics industry due to its anti-aging properties.

Vitamin C contributes to the normal functioning of the immune system.

Severe vitamin B1 deficiency causes a disease called beriberi, which is associated with myocardial infarction, skeletal muscle degeneration, depression, and the development of edema.

Lack of it causes excessive agitation, depression, insomnia, and excessive sensitivity to sounds.

It has a beneficial effect on the growth of the body, reproduction, growth of the skin, nails and hair. Improves vision, prevents the development of mucositis. It helps in the metabolism of carbohydrates, proteins and fats. It is absorbed by vitamin B6, vitamin C and niacin. Regular use of some medications (such as antidepressants), alcoholism, and trauma increase the body’s need for this vitamin.

Vitamin B3 helps reduce fatigue while also playing an important role in metabolism due to energy production. Preserves the health of the skin and nervous system.

Also called pyridoxine, it is also very important for the immune system and other processes in the body. It contributes to the synthesis of cysteine and the metabolism of homocysteine, proteins and glycogen. It supports the functioning of the nervous system and the psyche. It is involved in the production of red blood cells and regulates hormonal activities.

It is involved in blood formation, amino acid and nucleic acid metabolism, and adequate folic acid supply is essential for healthy fetal development.

It is also known as cyanocobalamin and plays a role in cell division. It plays an important role in the proper functioning of the immune system, nervous system and mental state. It contributes to the production of red blood cells and the metabolism of homocysteine. Like many of the Bs, B-12 affects metabolism, which is important for energy production, and inhibits the symptoms of fatigue.

Vitamin B7 stimulates nail growth. The faster your nails grow, the stronger and less fragile, and of course, the prettier and healthier. Lack of it can cause hair loss and dermatitis.

Its role is multifaceted, a key component of an enzyme in the conversion of carbohydrates and fats into energy. It contributes to proper growth, healthy functioning of the nervous system, protects against exhaustion, promotes wound healing. It helps fight infections through the production of antibodies. It is important for the normal functioning of the adrenal glands.

The physiological role of iron in the human (and animal) body is invaluable. Iron is an essential (vital) microelement for our life functions, but our body is not able to produce it, so we need to get it from the outside with food and, if necessary, iron supplementation. Because the absorption and utilization of iron in the body is rather poor, only a fraction of the amount of iron in the diet gets into the bloodstream and then goes to the places where it is needed.

Iodine ensures proper mental development, regulates metabolism and maintains thyroid function. In Hungary, the arable land is low in iodine, so the plants grown here are also low in iodine. Studies among pregnant women confirm that the newborn had an IQ lower by 20% with inadequate iodine intake. Iodine deficiency can cause the thyroid gland to grow, which can lead to hypothyroidism.

The role of the trace element in various diseases has long been studied. Its replacement has also been linked to diabetes, a reduction in blood fat levels, weight loss and changes in body composition. Chromium is an essential trace element that is not produced by the body, so it needs to be included in the diet.

Molybdenum is a micro-mineral that is only present in very small amounts in our bodies. Nevertheless, its role is essential for us. Molybdenum also plays a role in the function of several important enzymes. It is also involved in the synthesis of nucleic acids, the breakdown of amino acids, the conversion of fats into energy and the disposal of certain harmful substances.

Helps keep nerves running smoothly and keep us well. Essential for maintaining male potency and fertility . One cause of impotence in older men may be a lack of molybdenum in the diet.

Quality: Like all other Marathontime products, Hair Vitamin is made from safe ingredients in Europe.

Warning: A dietary supplement is no substitute for a balanced, varied diet and a healthy lifestyle!

Don't miss out on discounts!

Sign up to find out about our special offers!